The Bryant Law Center closed out our Roundup lawsuits after successfully negotiating for settlements for our clients in 2021.

A federal judge ruled last July 10 that a jury could hear expert opinions in lawsuit alleging that exposure to Roundup – a common vegetation/weed killer – can cause Non-Hodgkin’s Lymphoma (NHL), a cancer of the lymph system.

The ruling came in a multidistrict litigation panel case where more than 450 Roundup cases from around the nation have been consolidated for purposes of discovery.

There have been multiple verdicts for plaintiffs. Groundskeeper Dewayne “Lee” Johnson in August of 2018 was awarded $289 million, which included $250 million in punitive damages. A judge later reduced the award to $78 million. Johnson has appealed to reinstate the original verdict.

In May 2019, a jury awarded $2.055 billion to a California couple in their 70’s, Alva and Alberta Pilliod, who suffer from non-Hodgkin’s Lymphoma. The award gave $1 billion in punitive damages to each victim and $55 million together for medical and economic damages.

A California jury in 2016 awarded $80 million to Edwin Hardeman, a farmer, who used Roundup on his rural property for several years and who developed non-Hodgkin’s Lymphoma. The jury awarded $5 million in compensatory damages and $75 million in punitive damages.

Roundup – a branded name for the chemical called glyphosate – has been used to control unwanted grass and weeds since 1974. Concerns are mounting that prolonged use and exposure is associated with an increased risk of NHL, a form of lymphatic cancer.

Those most impacted are believed to be landscape workers; nursery workers, commercial gardeners and groundskeepers, crop sprayers, farmers and agricultural laborers or their loved ones. 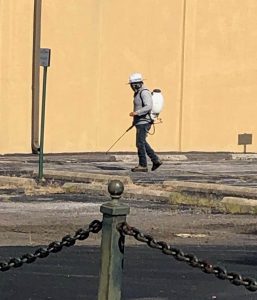 There is no current research that indicates occasional Roundup use – such as what a homeowner would briefly spray on a sidewalk or patio – is harmful. Instead, researchers are more focused on occupational exposure for longer periods of time.

The hundreds of lawsuits are pending against Monsanto Co. in U.S. District Court in San Francisco, were filed by victims or loved ones alleging that Monsanto covered up the health risks of exposure to Roundup herbicide.

Plaintiffs allege that exposure results from skin contact and/or ingestion or inhalation. Critics also say that people living near areas of commercial application can also be exposed although they are not involved in the application or use.

Unlike some cancers, the American Cancer Society says that NHL is not inherited and is most likely caused by “exposure to cancer-causing chemicals, radiation, or infections, but often these changes occur for no apparent reason that seem to happen more often as we age.”
The International Agency for Research on Cancer, based in Lyon, France, in 2015 had classified the chemical as a “probable human carcinogen.” Canada also banned residential and ornamental applications in 2009.

Monsanto Co., the manufacturer, makes an estimated $12 billion a year from sales of Roundup/glyphosate and the sale of Roundup resistant seeds which it developed.

The American Cancer Society says to be alert for NHL symptoms. “The best way to find NHL lymphoma early is to pay attention to possible signs: enlargement of one or more lymph nodes, causing a lump or bump under the skin which is usually not painful. This is most often on the side of the neck, in the armpit, or in the groin … Other symptoms can include fever, night sweats, weight loss, feeling tired, and swelling in the abdomen.

More often these symptoms are caused by something other than lymphoma, but it’s important to have them checked by a doctor, especially if they don’t go away or get worse.”

The prognosis for an NHL diagnosis shows more than half of the diagnosed victims have a 10 year life expectancy. It is treated with chemotherapy and radiation.

Roundup settlements occurred in 2021.  This is now considered closed.